According to a report from The New Yorker, the first tourist flight operated by the Virgin Galactic company, which featured company founder Richard Branson, could have gone very badly. What exactly do we know about this incident?

Virgin Galactic operated its first official crewed mission on July 11. On board the VSS Unity suborbital aircraft, dropped at high altitude by its carrier aircraft, the crew experienced four minutes of weightlessness before descending to Earth. If the mission was indeed presented as a real success, it seems that in the end everything did not go as planned.

During the flight, towards the end of the combustion sequence of the VSS Unity engine, a yellow light would indeed have appeared on a console. This light indicated to the company’s veteran pilots, Dave Mackay and Mike Masucci, that the aircraft was starting to deviate from its course. A few seconds later, another warning light, red this time, appeared on the console.

The two pilots then had to make a split-second decision: turn off the rocket engine and return to Earth in a perilous emergency landing or take immediate action to resolve their trajectory problem.

This scene is described in a new report by Nicholas Schmidle, in The New Yorker. As part of the writing of his book entitled Test Gods, the journalist had benefited from privileged access to Virgin Galactic, and in particular to this flight project for space.

In his book, he explains that he attended a meeting in 2015 during which the pilots of the July 11 mission and others discussed the procedures to be followed in the event of a warning by these famous seers. CJ Sturckow, a former NASA astronaut, then reportedly told pilots that a yellow light should “scare you” because a red light would indicate that it was “already too late”.

During the flight of the VSS Unity, the pilots therefore chose to continue despite this warning. Rather than shutting down the engine, the two pilots would thus have tried to put the vehicle back on a safe upward trajectory so that it would be able to return safely to Earth afterwards, which they did at the risk of putting their lives. potentially endangered crew members.

In the meantime, the VSS Unity would have flown outside its designated airspace for 1 minute 41 seconds, or more than 10% of its flight time after being jettisoned from its carrier aircraft. The Federal Aviation Administration (FAA) is currently investigating the incident. 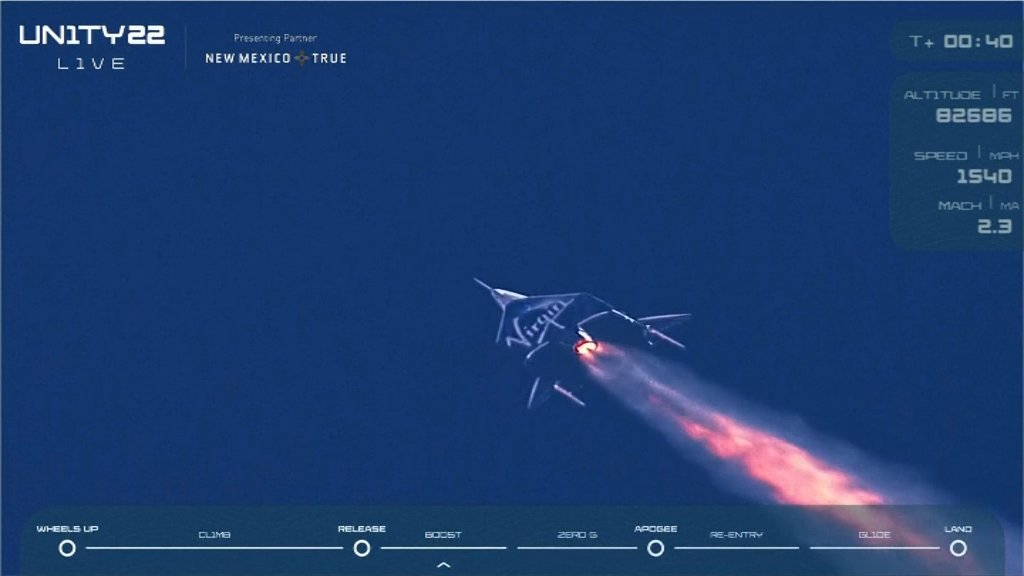 Here is what we learn, in broad outline, this story published in The New Yorker. Following its publication, Virgin Galactic nonetheless issued the following statement: “We dispute the misleading characterizations and conclusions of the article. […] The safety of our crew and passengers is Virgin Galactic’s top priority ”.

“Unity 22 was a safe and successful test flight that adhered to our flight procedures and training protocols,” the statement continued. “When the vehicle encountered high altitude winds that altered the trajectory, the pilots monitored the trajectory to ensure it remained within mission parameters. Our pilots reacted appropriately to these changing flight conditions. […] Although the ultimate flight path deviated from our original plan, it was a controlled and intentional flight path that allowed Unity 22 to reach space and land safely in our spaceport. in New Mexico. At no time were the passengers and crew endangered by this change of trajectory ”.

And ending with: “As we move into a sales department, we are confident that we have put in place the right security culture, policies and processes to build and operate a safe and successful business for the long term.”

Remember that this is not the first time that a Virgin Galactic mission has encountered potentially dangerous technical difficulties. A pilot paid a heavy price for this in 2014 during a previous test flight. During another test flight in July 2018, pilots Mackay and Masucci also lost control of their aircraft as they flew over the Earth’s mesosphere. As the New Yorker recalls, however, they managed to regain control and land safely.

Mark Stucky, another Virgin Galactic pilot, was also recently fired from the company after voicing concerns about the company’s security practices in a book published in May by Nicholas Schmidle.

Long-lasting disinfectant promises to fight the spread of pathogens