At the request of the National Natural Science Foundation of China, a group of scientists are currently working on the development of an ultra-large spacecraft. Preliminary research will focus on examining the challenges associated with the development of lightweight structures and assembly in orbit.

Over the past two decades, the Chinese National Space Agency (CNSA) has taken several historic milestones, from sending astronauts into space, deploying three orbital stations, and successfully landing rovers on the Moon and on Mars. And the country does not intend to stop there. Like NASA or SpaceX, China is in fact planning to build a research base on the Moon. It would also be a question of a manned mission to Mars from 2033.

More interesting and surprisingly, the country’s leaders are also reportedly considering the development of a kilometer-scale “ultra-large spacecraft”. Positioned in low Earth orbit (LEO), such a structure could then authorize long-term missions and promote the exploitation of extraterrestrial resources. At least that’s the plan.

A few weeks ago, the National Foundation of Natural Sciences of China pledged an envelope of 15 million yen (about 1.94 million euros) to start the research. One of the main goals of the project would be to find ways to reduce the mass of the spacecraft while ensuring that it can be assembled in orbit, according to an initial report from the South China Morning Post. 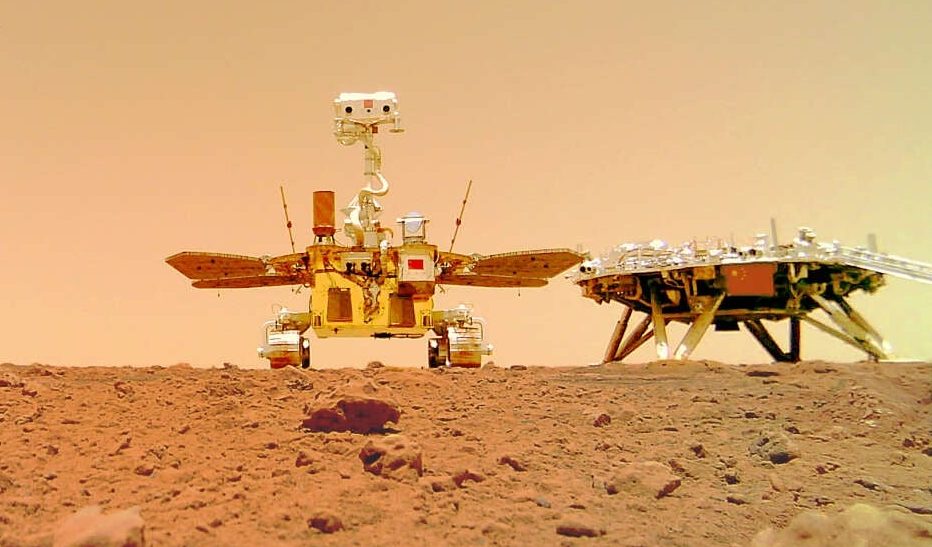 The Zhurong rover and its lander photographed on Mars. Credits: CNSA

A project that questions

For now, this is obviously only a project on paper, but the proposal raises some questions. Starting with the cost of such a structure and the logistics associated with its development.

As a reminder, the assembly of the International Space Station (ISS), which is currently the largest man-made structure ever assembled in orbit, required no less than 42 flights, 36 of which were provided by American space shuttles, while the others were carried out with Russian launchers Proton or Soyuz-U. In total, the development of the ISS would have cost no less than 150 billion dollars. About $ 4 billion is also disbursed each year for operations and general maintenance. And yet, the ISS measures 109 meters from end to end.

Either way, it will be interesting to keep an eye on this exceptionally large project. It is not the only one in the papers. Chinese officials plan to use its next super-heavy launcher, currently under development, to build a huge space solar power plant in geostationary orbit. More than ever, China is taking its new status as a major space player very seriously.

Parts are missing: Opel stops production in Eisenach for months