China is looking to develop a small helicopter similar to Ingenuity, deployed to Mars by NASA, in an attempt to expand its space exploration capabilities. A first prototype has just been officially approved.

Fly to another planet

On the Red Planet since last February, the Perseverance rover is indeed accompanied by the Ingenuity helicopter (1.8 kg). The vehicle made its first powered flight (the first ever on another planet) in April. It operated its 12th, most recent and ambitious flight on August 16, covering a distance of 450 meters in 169.5 seconds.

Ingenuity does not wear any scientific instrument. It is indeed a demonstration mission aiming to pave the way for other more ambitious machines. In fact, NASA is already examining other concepts. Once deployed, these vehicles will be able to accompany future Martian explorers by allowing the transport or recovery of payloads. They could also be used to anticipate crossing routes, to estimate the potential of several exploration zones otherwise inaccessible for rovers or to allow the exploration of lava tunnels. 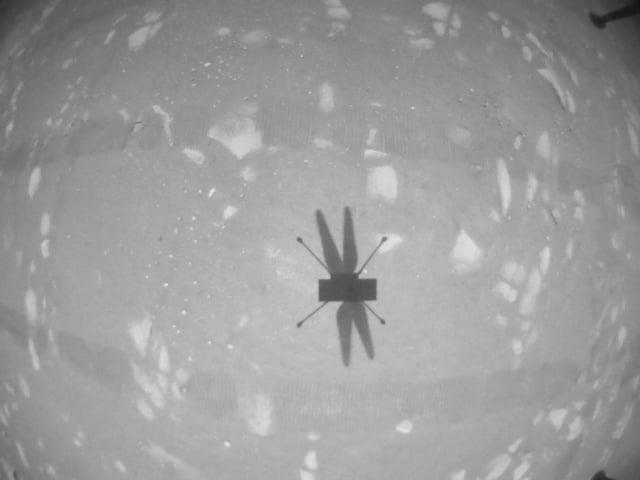 The shadow of Ingenuity cast on the ground. Credit: NASA: JPL

It should also be remembered that in 2027 NASA will launch its drone called “Dragonfly” (“Dragonfly”) towards Titan. The three-meter-span craft will examine the habitability potential of Saturn’s largest moon by making “leaps” several kilometers long. One of the objectives of this mission will also be to search for chemical biosignatures that could indicate past or present life.

Also, piloting a helicopter on Mars, only NASA knows how to do it at the moment. The prowess of Ingenuity and the many advantages linked to the deployment of this type of vehicle in extraterrestrial environments have indeed not gone unnoticed. According to SpaceNews, China is for example also working on the development of its own rotorcraft. Last Wednesday, the National Space Science Center (NSSC) announced that a first prototype equipped with a microspectrometer passed a final acceptance exam on August 20.

The deployment of this small helicopter could be considered for future Chinese exploration of Mars, but the NSSC has not identified a specific mission. We do know, however, that the next Chinese mission to the Red Planet, scheduled to launch in 2028 or 2030, provides for a return of samples in the early 2030s, before considering a first manned mission to Mars in 2033.